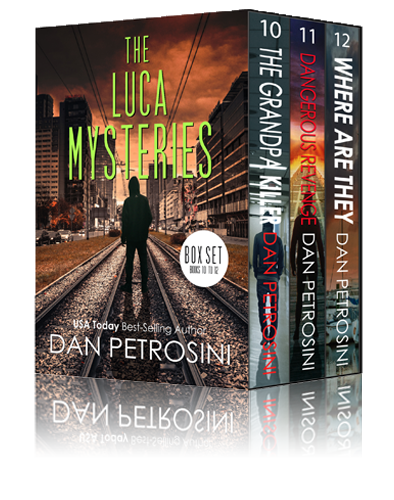 Three twisty cases you’ll never be able to guess who did it or why.
That’s okay, Det. Luca is on it!

This box set contains – Book 10 – The Grandpa Killer – Two eighty-year old victims…had roofies in their system. Why would someone give the victims a date-rape drug?
Book 11 – Dangerous Revenge – It was his first time…being grilled by Internal Affairs.
Could Luca clear his name in time? As a new gang, pushing a deadly and addictive drug cocktail, threatens the city, Luca is on the sidelines. Yes, mistakes were made…
Book 12 – Where Are They – Luca had seen it before…the spouses left behind never believed. When sex enters the equation, the math changes.