Tickle Someone to Death? 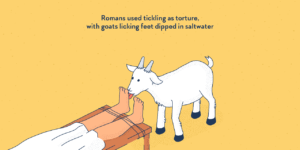 Everyone loves a good laugh but telling a good joke is an art most don’t master. For the joke impaired, an easy way to make someone laugh, is to tickle them.

Tickling someone generally elicits a pleasurable response. I say generally, because throughout history, tickling has been used as a form of torture.

In ancient China, tickle torture was used as a way to punish the noble class. It was preferred over other types of discipline because it left no marks and the victim would recover fairly quickly.

It was also used as a torture tool in ancient Japan, where it was called merciless tickling.  My favorite historical reference, depicted above, has the Romans tying a prisoner down and then coating the bottoms of their feet with saltwater. They would then bring out a goat, who would lick the salt off, igniting uncontrollable laughter.

Additionally, and more recently, there is documented evidence that Nazi guards tickled inmates in a concentration camp in order to torture them.

In most cases, this torturing took the form of stroking a sensitive part of the body, mainly the soles of the feet, as they contain a high number of nerve endings. This quickly becomes unbearable, either from the length of time or intensity of the tickling. But is it deadly?

Since the reaction to tickling is spontaneous, the person being tickled loses control over their body, leading to physical and mental distress.  Being under duress makes you vulnerable to a breakdown, especially, for those with an underlying condition.

Prolonged laughter has been proven to trigger heart failure and cause asphyxiation. It can also set off a severe asthma attack, which untreated, may result in death.

There are many cases of people dying from laughter attacks making being tickled to death not as crazy as it sounds.